a glint and a laugh

Gale always had a glint in his eye when he talked about magic, a hint of something more beneath the surface. He never lied, but he never told the entire truth either.

Lin never asked. She learned very early in life not to pry. The life as a half-drow street urchin was not a kind one but it was a damn good teacher. She kept her secrets from everyone as well after all. Not from Lyle though. Never from Lyle. But he was long gone, so her secrets stayed close to her heart, where they're safe.

Lin loved that glint of Gale's. It was a playful one, a promise. She knew he was big on theatrics and it wasn't an act, not exactly. It wasn't all he was either.

She recalled the time she found him deep in thought by the fire. It was shortly after they'd met. He stood there, pensive. Lin had known he wasn't just a gregarious wizard who was bouncing around playfully, wizards rarely were, but she was still caught off guard. He was still kind and open but he was also grounded. For the first time since she found herself on that mind-flayer ship, despite all the uncertainty and the ticking bomb inside her head, Lin felt safe.

After that day, whenever she felt like spiraling, he somehow grounded her. She'd sit in the camp thinking about all the people they might ask for help, not knowing which one -if any- would be able to cure them, and then suddenly hear his laugh, either playing a game of cards with Wyll or trying to pry some info about the astral plane from a very frustrated Lae'zel, and Lin would feel okay again.

She looked at him now. He was talking with Shadowheart about Shar rituals and magic with that familiar glint in his eye. Lin never cared for magic until she met Gale. Seeing it through his eyes, seeing his love for it somehow made her love it too. Because he was magic and magic was him. His eyes drifted and met Lin's for a moment. Right before he looked back at Shadowheart he winked at Lin, causing a lot of blood to rush to her, thankfully very dark-colored cheeks.

She didn't know when exactly her trust had turned into infatuation, but she could never look at him anymore without thinking how delightful she found him. How she could listen to him talk all through the night into the dawn, how she adored the way his hair curled into his neck after a long day of walking, how his laugh was a song to her ears and when he ended up dead in that fight with the goblins, how his death ending the world was the least of her worries, for she needed him in this journey more than she needed the rest of the world. It was never as kind to her anyways.

She knew he had his secrets and his past hanging over him all the time. But so did she. Still, they could find some way to meet in the middle. At least they could try.

Gale looked at her again, more serious this time, and she didn't need the parasite or the Weave to know he felt the same. 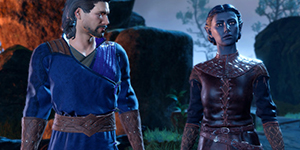